Ardmore’s historic preservation activities began in 1983 when the Ardmore Historic Commercial District was listed on the National Register. The Ardmore Main Street program was established in 1989 by the Ardmore City Commission. Its mission in part is “to preserve and improve the historic value of downtown.”

Our main goal is to achieve community-wide awareness of historically significant architectural, archaeological and natural features of Ardmore and an understanding among residents and property owners of the unique features of their historic districts. 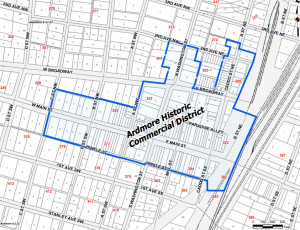 The District Consists of 119 mostly masonry commercial buildings located on the north side of Hinkle Street and the north and south frontage of Main Street between “C” Street SW on the west and the Santa Fe Railway right-of-way; on Washington Street from Main to 2nd Avenue NE; on Caddo Street from Main to one-half block north of 2nd Avenue NE; and buildings on the “A” Street frontage on the east side if the street between Main and Broadway.

The Certificate of Appropriateness (COA) is used by the HPC to approve proposed work done to properties in the Historic District and must be approved prior to work commencing. The HPC uses the Ardmore Historic Commercial District Design Guidelines as a framework for basing its decisions.  You can find an application for a COA here. 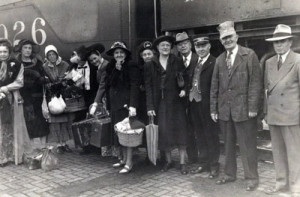 Most historic preservation work is locally initiated, locally led, and locally funded. Recognizing this fact, the City of Ardmore adopted its historic preservation zoning ordinance on August 1, 1998 (Section 316 of the Ardmore Building Code) to identify and protect the districts and landmarks that give Ardmore its unique character. To strengthen enforcement of the ordinance and other local preservation efforts, the City became a Certified Local Government (CLG) on December 15, 1998.

The National Historic Preservation Act (NHPA) offers partnership-programs between federal, tribal, state, and local governments to identify, evaluate, and protect the buildings, structures, districts, sites, objects, and landscapes significant in the nation’s history. Since passage of the NHPA, the National Park Service (NPS) and State Historic Preservation Offices (SHPO) have worked together to carry out the national preservation programs, including the CLG program. The Oklahoma SHPO administers this national program, established under the 1980 amendments to the NHPA, for Oklahoma. Ardmore is one of thirteen Oklahoma cities currently participating as CLGs.

As cooperative efforts are fundamental to the success of historic preservation in both the public and private sectors, the CLG program provides an opportunity for Ardmore to benefit from a formal partnership with the SHPO and the NPS. The CLG program helps the City of Ardmore increase public awareness of its valuable historic resources, expands the number of preservation management tools, and integrates preservation concerns into its local planning process.

As a CLG, the City of Ardmore has a formal role in the nomination of properties to the National Register of Historic Places. The City also receives matching funds each year from the SHPO’s Historic Preservation Fund allocation from NPS. This grant assistance has enabled the City to develop and publish the City of Ardmore Historic Preservation Plan and the Ardmore Historic Commercial District Design Guidelines. Additionally, the City has used the funding to produce National Register of Historic Places nominations, brochures, and this website.